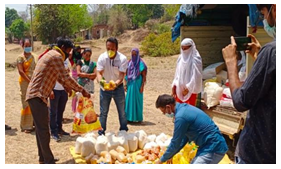 The COVID-19 pandemic has taken the world by storm but has at least helped the countries and states to revisit their health systems and health care delivery.

The 21-day lockdown which has been extended till the 31st of August recently, announced by the Prime Minister on the 23rd of March had multiple effects on the community at large. It .has affected the most vulnerable of the tribal group – the Katkaris, some widows who are staying alone in far to reach hamlets and the seasonal migrants and their families from other blocks and districts in the State. The worst hit, of course, are the migrants and small scale industrial labour who leave their home town and enter other cities/villages in search of menial jobs. As the companies and brick kilns were shut down and their owners stranded in the cities, the migrant population had been left in the lurch with nowhere to go, no money and lack of basic necessities like food and water.

AROEHAN as a team has always strived to help the most vulnerable tribals in the various blocks of its implementation. The team was able to identify many such individuals and families in the villages and hamlets of Palghar and Mokhada Block in Palghar district through reliable sources and we decided to help them with dry ration and hygiene essentials.

There had also been requests for hygiene/ protective consumables (mask, sanitizer, gloves) from the PHCs as well as the front-line workers of Palghar, Jawhar and Mokhada block.

Summary of the relief work undertaken:

We could provide dry ration kits and hygiene essentials to 3042 migrant BPL families in Palghar, Dahanu and Mokhada blocks of Palghar district with the funds received from various individual donors as well as Corporate.

We have also been able to provide surgical masks and hygiene kits to health personnel, ASHA workers, Anganwadi workers and police administration in Jawhar and Mokhada blocks with support from our corporate donors. They were provided with 3552 bottles of hand sanitisers, 3520 cloth masks, 3200 surgical masks and 4850 pairs of hand gloves. 22 Pulse Oximeters have been provided to the Medical Officers and ASHAs at Mokhada and Palghar resp.

The Sarpanch and the local volunteers along with some villagers helped identify the settlements of the migrant families. The dry ration was picked up from the grocery stores who were permitted to remain open for supplies at the Taluka place.

A tempo was hired for transport and our staff also used their own vehicles to transport the goods to the respective villages.

All the precautionary methods like hygiene, social distancing were maintained and a list of beneficiaries made for our records.

A considerable population is still left out in small pockets in various hamlets in and around Palghar, Mokhada and Dahanu block. We are still carrying out the good work of providing dry ration in these areas. Along with this messages on hygiene, hand wash, social distancing and respiratory etiquette are also conveyed by our field workers to the group.