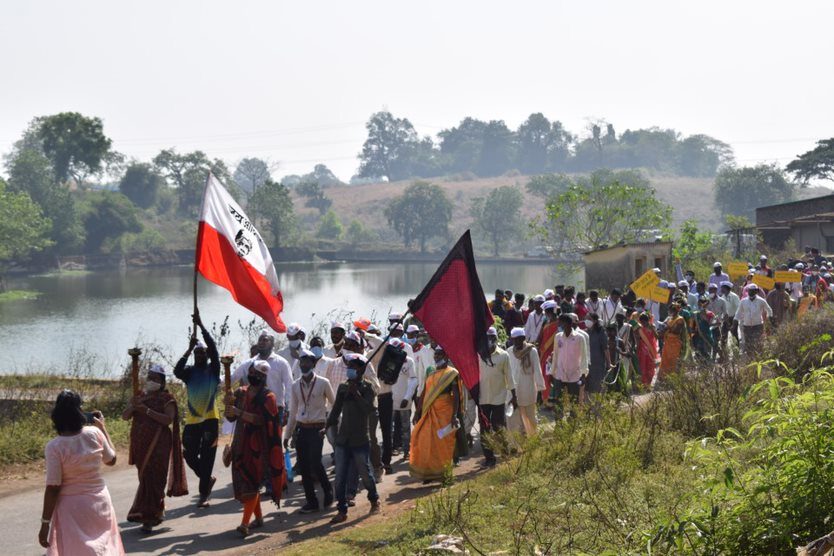 25 years of PESA Act Enactment: The Strength of Tribal Community

Mokhada taluka of Palghar district have different communities and cultural diversity. Tribal people here belong to various communities such as Varlis, Thakurs, Kathkaris, Dublas, Vaitis, Konkanis, Dhodiahs, Dhorkoli and Mahadeo Koli. The Provision of the Panchayats (Extension to Scheduled Areas) Act, 1996 or PESA and the Panchsheel Principles of India guarantee protection to indigenous people. Indeed, the Indian Constitution is constituted to protect the tribal interests, especially tribal autonomy and their rights over land, through the Fifth and Sixth Schedules along with PESA Act that was enacted on December 24, 1996, to enable tribal self-rule. PESA offers a great opportunity to provide equitable governance in tribal areas of Mokhada. AROEHAN organized and conducted a “Rally for Rights” in Mokhada to celebrate the true spirits of democracy and self-governance.

The celebration started on 23rd December with a Rally for Rights from three junctions of Mokhada and continued by the rally on 24th December at Hutatma Smarak at Mokhada.  People from different villages/padas and Gram Panchayat’s gathered together to celebrate 25 years of PESA Act enactment in tribal areas of India. The rally was carried out from Birsa Munda Chowk to Hutatma Smarak at Mokhada Taluka, Palghar. The local tribal people asserted their rights by reciting “जल, जंगल, जमीन आमचा अधिकार” and “आमचा गाव, आम्हीच सरकार” on the way to Hutatma Smarak. The entire rally had an atmosphere of empowerment and self-governance. The Adivasi culture was portrayed through folk dance, music and street plays. Children adorned the traditional attire and performed at the event. Mr.Amit Narkar, CEO of AROEHAN sparked the audience with his inspirational talk, highlighting the significance of PESA and the need for its ground-level implementation. Furthermore, informative pamphlets were distributed amongst the masses present. The program ended with a spirit of upliftment and the need for self-governance was felt right through the crowd.